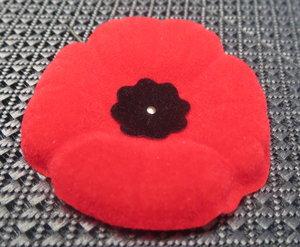 During this time of Remembrance, Mitchell Veterinary Services would like to take the opportunity to reflect on the bravery of not only all the men and women in our services, but also the animals who served and sacrificed with them. Here are just a few stories of the millions of brave animals who served alongside our soldiers.

Warrior was a horse who served in World War One. He was the warhorse of General Jack Seely and served on the front lines for the duration of the war, surviving many battles including the Battle of Somme. He survived being trapped under debris, two stable fires and being stuck in mud at Passchendaele. He was dubbed “the horse the Germans could not kill”. Warrior survived the war and returned home to the Isle of Wight to live out the rest of his life to the age of 32. He was awarded the Dickin Medal (Victoria Cross medal for animals) in 2014.

Gander was a Newfoundland Dog that served during World War Two. He originally started his career as a mascot for a group of soldiers stationed in Gander, Newfoundland. When these soldiers were sent to Hong Kong, they brought Gander with them. Gander would often charge at Japanese soldiers who approached injured Canadian soldiers on the field, saving numerous lives. On December 19th, 1941, a grenade was thrown towards Canadian soldiers during a battle. Gander immediately picked this up and ran away from the injured Canadian soldiers nearby. This bravery saved many lives, however, it cost Gander his own during the ensuing explosion. Gander was awarded the Dickin Medal in 2000 for his bravery.

G.I. Joe was a pigeon that served with the United States Army during World War Two. He is credited with saving the lives of at least a thousand British troops. On October 18th, 1943, the American Airforce was set to bomb a city in Italy to allow the British troops to move in. However, the Germans retreated, and the British troops took hold of the city far ahead of schedule. Numerous attempts were made via radio to cancel the air raid, but were unsuccessful. G.I. Joe was sent with the message and flew at an incredible spend, covering 20 miles in 20 minutes. He arrived at the air base with the message just as the planes were warming up to take off, preventing a horrible tragedy. In 1946, G.I. Joe was awarded the Dickin Medal. He lived out the rest of his life in the Detroit Zoological Gardens, where he passed away at the age of 18.

Simon was a cat found by a member of the crew of the British ship HMS Amythest in 1948. He was smuggled aboard the ship, but soon became a favourite of the crew due to his adeptness at catching and killing rats. He would often leave these as “gifts” in beds and even in the captain’s hat.

During a mission, the ship was to travel up the Yangtze River when they came under fire. The gun fire killed and injured many crew members and seriously injured Simon. The medical staff were able to treat Simon, and even though he was not expected to live the night, he recovered and was back to hunting rats within a few days. This was a very important duty, as the ship was stranded and food stores were low. Rats were known to eat and contaminate food on ships. More importantly, Simon would visit the injured sailors and kept morale up on the ship. Because of his important duties, he was awarded the rank of “Able Seacat”. The ship did eventually escape the area. Unfortunately, while in quarantine for entering England, Simon died of a viral infection. Simon was awarded the Dickin Medal in 1949, shortly after he passed away.