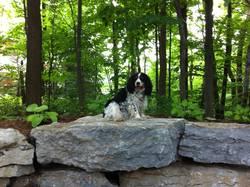 Giardia is a protozoal parasite that lives in the intestines of infected animals and humans. While feeding in the intestines, Giardia parasites eventually form cysts around themselves and are passed through feces into the environment. The cysts are able to live for months in many different environmental conditions, and so Giardia is very common.

Where do dogs get it?

Dogs are infected with Giardia when they ingest Giardia cysts. The cysts break down in their digestive tract and the cysts attach to their intestinal wall. The most common source of Giardia is from contaminated water. However, Giardia is very common in the environment (can be anywhere an animal has pooped).

What are the signs?

Most dogs show no signs of infection. Healthy adult dogs, immune system typically can handle the infection. However, in some cases, especially puppies, giardia can cause diarrhea.

How is it treated?

If your dog has diarrhea, it is best to take it to the veterinarian for a thorough physical exam. Here at Mitchell Veterinary Services we recommend that you also bring a fecal sample with you (as fresh as possible!). Your veterinarian will be able to use this sample to check for Giardia. Once diagnosed, Giardia is easily treated with specific medications. You should also bathe your dog once you start treatment.

How can I prevent Giardia?

Since contaminated water is the most common source, preventing your dog from drinking water from outside is the best way to help prevent it. That being said, it is difficult to prevent your dog from accessing all sources of the parasite.

Can humans get it?

Humans can be infected with Giardia. Humans also get infected by ingesting the Giardia cysts. This can be done through drinking contaminated water, handling feces and not washing hands, or getting licked by an infected pet that has recently licked their bum! As with animals, most healthy adult humans can fight off the infection themselves with no symptoms. However, immune compromised individuals (children, elderly, pregnant, chemotherapy patients, etc.) could come down with severe diarrhea. To avoid infection, immune compromised individuals should completely avoid handling animal feces. All people should make sure to wash their hands after cleaning up after their pets.